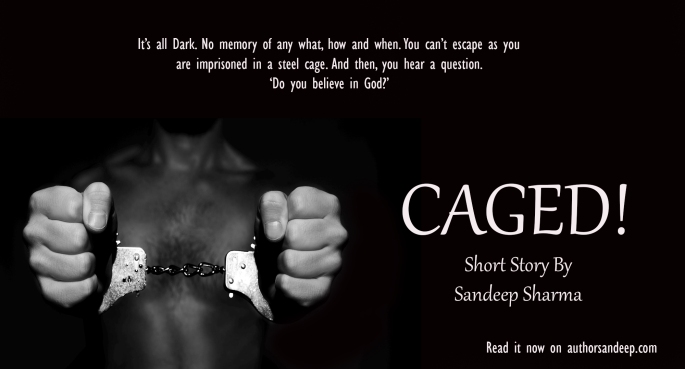 “Help!” He shouted his lungs out. “Get me out of here. You are doing a mistake.” He beats the four corners of the steel cage in which he was kept imprisoned. It was all dark, he can’t even stretch his own legs as the space was restricted him in doing so. He was absolutely clueless of every what, why and when. The only thing that lingered in his mind at that very moment was ‘fear’. Fear of unknown.

“Get me out of here.” He shouted once again and kept on beating the steel with his fist till he heard someone.

“Shut up, you are disturbing me.” The voice was harsh, as if in some pain but still firm.

“Hey, listen… please get me out of here.” This time he doesn’t shouts. He wanted to convince the other man whom he just heard.

The voice was silent.

“Who are you? Why you have imprisoned me?” He asked while sobbing under his breath.

“Is this some kind of Game?” He asked with full of anger.

“What do you want?” He almost started to cry.

“What kind of answers? I don’t know anything. Just get me out of here. Please.” He was getting impatient.

“I am not asking for answers from you. How could you answer my question?” The voice chuckled on his own words.

He was confused. Looking for proper words to utter so that he could know something of his situation but a mind full of fear is of no use. “Why have you bought me here? What I have done wrong to you? Fuck I don’t remember anything.” He felt silent and then started to beat the steel box vigorously, “Get me out of HERE!”

“I am not the one who bought you here.” The voice replied in a very low voice. “I am also just like you. Caged. Prisoned.”

He stayed silent. He was confused. What is happening here?

“Don’t think too much. The quicker you let it go, the calmer it will feel.” Voice broke the silence.

There was absolutely no conversation for about an hour. He kept on weeping, crying, sobbing, beating the steel cage and then suddenly stopped.

“You said you are looking for some answers?” He asked.

“What’s the question?” Voice didn’t reply. “For god sake, you must know anything about this place?”

“God!” Voice repeated the word. “Do you believe in God?”

“Why are you asking?” He questioned the voice.

“I am just giving you the answer of your question. Do you believe in God?”

“Even I don’t used to believe him. But then I do remember my mother saying that whether you believe in him or not, he does take your tests, when time comes.” Voice took a pause, took deep breath and continued, “I remember opening my eyes in this steel chamber about few days ago. I was stressed, just like you, and then I heard a voice, just like you are hearing me today. That voice told me that God is testing me. I am on trial for all my sins. I found that funny but then I had to believe him because what he said, was actually true.” Voice took another pause.

“My sufferings will automatically stop on the day when God will accept me as his child. The only thing, I have to do is to keep asking for his forgiveness.” Voice concluded.

“Are you drunk or something? Is this some kind of a joke?” He said.

“I asked the same but then I heard him getting free. I heard him meeting the God. I heard him crying out of happiness. And for that, I’ll accept this joke or whatever it is.” Voice felt silent. Even he kept quiet. He had nothing to do other than accept the God’s will.

Video went blank. Lights of the room were switched on. Everyone adjusted their pupil with the intensity of the light and waiting for Miss Sunita Bakshi to take over the conference.

“What you have just seen on the projector screen was a very small part of our experiment.” Miss Sunita Bakshi stood up from her chair and started explaining the experiment to other members sitting in the conference room.

“Since ages we are discussing about God’s presence. Is there anything above us who is controlling our action or is it just a fake story? One year ago, I and my team, picked up some random subjects (people) off streets and erased their memory. We kept them in an environment to test upon their psychology and this was just a small snippet of our experiment that proved our theory.” She took a pause to examine her audience closely. They seemed interested. “We put on subject in a steel cage and made him believe on our story of God. We noticed that the moment we gave him something to rely upon, he experienced peace. After few weeks we introduced another subject in the same environment and this time we did nothing to convince him but our ‘Subject A’ himself told the same story to ‘Subject B’ and that’s what you have just seen on the screen.” He felt silent. Room was humming as everyone started discussing with each other and at the same moment, Sunita Bakshi concluded:

“Which means God is nothing but a story to make peace amongst humanity.”