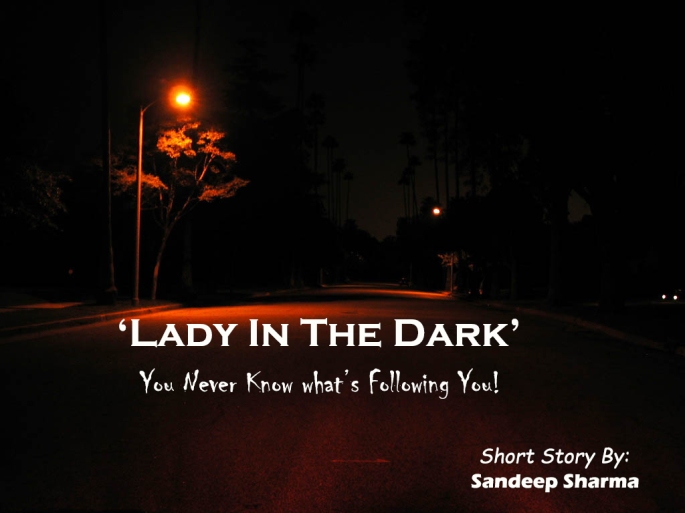 Staring out of the window, I could see that lady. Dark streets, flickering street lights, atmosphere full of the barking dogs, distant and far and that lady, walking all alone to nowhere.

I lit my cigarette, closed the lights of the room, positioned my chair next to the window with curtains aside and focused on the lady in the dark. That lady was wearing something black, I assumed that as a black clock covering her body from neck to toe and a black hat to give her a bit suspicious look. I could play with her appearance because I wanted to. She was my character now and I, while sitting in my hotel room, was looking for my story that was scheduled to be submitted by the end of this month.

It was all dark but still I could sense some fear in her steps. Moving and stopping with periodic turning backs to stay alert of some kind of follows. ‘Yes, someone was definitely following her’, I assumed till I saw something suspicious. Someone was actually hiding behind the big steel garbage bin.

Suddenly I felt a special kind of energy. I picked up the diary lying next to me and started writing every aspect of it. The lady in the dark, has fetched my attention and I wanted to know, everything about her.

I was patiently waiting for the first move of the person sitting next to the garbage bin. As patiently as he was waiting for the lady’s attention to waver a bit. Soon the time came and the man started moving. He was finding it difficult to move. Was he in some kind of pain? Was he drunk? What could be the story of the man?

Lady kept on moving ahead, without a single trace of the knowledge of what was following her. Suddenly, with the flickering lights, I saw the lady having something in her hands. A child, maybe. Well, yes that was a child. Who’s child? Is she saving the child from the drunkard man or stealing the child by hurting the man? What could be the story?

I didn’t blink for next few minutes. I was tensed because of fearful characters of my ‘story’. My ‘story’ was unfolding in front of my eyes. Expecting it to be a page turner, I was observing every details of it.

Finally the veil of darkness over the face of the suspicious man lifted as the moon light got exposed over his figure and with it something shines, the blade of the knife he was carrying in his hand.

Lady saw the man, she stopped for a while and then rushed towards the road end and kept the baby on the road. I was certain that now the climax is near. Lady will surely fight the man. Who will win? That’s the question.

There must be few drops of sweat on the forehead of the lady. A sly smile over the face of suspicious man will surely be accompanying the overall scene. I lit another cigarette and blew out smoke vigorously.

Man looked behind, just to verify that no one watches him when he do the kill move. Lady looked in all direction in hope to call some help. Child must have been sleeping as there was no movement there.

Man came closer, looked at the eyes of the lady. Lady did nothing, just stood still. Man raises his knife upto the head’s height and pierces the sharp blade in the chest of the child. Child died. Lady and the man ran away from the scene with their hand in hand.

I was in shock. Cigarette fell off my lips and with so many thoughts and mainly the frustration made me run out of the hotel where I was staying to the streets where the child was lying dead. It took me around 5 minutes to cover the distance and once I reached and saw the child lying dead over the floor within the red parameter of his own blood, I had no idea what to do. I just sat next to the child and said, ‘Why?’. When nothing came as an answer from nowhere, my frustration made me cry out louder, ‘WHY?’

One thought on “‘Lady in the dark’ – Short Story”